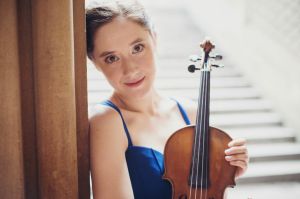 Emily Kalish, violinist, started subbing with the Binghamton Philharmonic in 2008 and became a member in 2010.

After earning a Bachelor’s degree from the Hartt School in Connecticut, where she studied with Katie Lansdale, Emily moved to New York to pursue a Master’s degree at Manhattan School of Music, where her teacher was Burton Kaplan. As an orchestral player, she has played under the batons of Kurt Masur, JoAnn Falletta, Gerard Schwarz, Robert Franz. A dedicated teacher, she is on the faculties of the Concordia Conservatory of Music and Art and Music Conservatory of Westchester.

Originally from Great Barrington, Massachusetts, she enjoys returning to idyllic Berkshire County often to perform. She has given at least one recital every year at St. John’s Episcopal Church in Williamstown since the inception of its Summer Noontime Concert Series in 2004 and also has played recitals at Bard College at Simon’s Rock and The First Congregational Church in Stockbridge. As a recitalist, Emily is committed to bringing audiences thoughtful, imaginative, and emotionally honest interpretations of the classical repertoire as well as new works written by 21st- century composers.