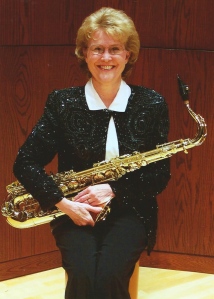 April Lucas joined the Binghamton Philharmonic as Third and Bass Clarinet in the early 1980s.  She also performs regularly with the Philharmonic on saxophone.  She earned both a Bachelor of Arts and Master of Music at Binghamton University and is currently on the faculties of Binghamton University and Broome Community College and a former member of the Hartwick College music faculty. Ms. Lucas is a founding member of the Empire Saxophone Quartet and has recorded with the Hudson Valley Saxophone Quartet, the Saxophone Sinfonia, the New Sousa Band and the Empire Saxophone Quartet.    A former regional director of the North American Saxophone Alliance, Ms. Lucas has served as a clinician and guest conductor throughout New York State. In 2009, Ms. Lucas retired from being a full time instrumental music teacher for the Susquehanna Valley School District.  Ms. Lucas is a member of the Tri-Cities Opera Orchestra and has been a member of the New Sousa Band under the direction of Keith Brion since 1989.  The Band has toured the United States, Japan and China.  In December of 2009 the New Sousa Band was the honored performing group at the Midwest Band and Orchestra Conference.  As a featured soloist, Ms. Lucas has appeared with the Southern Tier Concert Band, the Binghamton Community Orchestra and The New Sousa Band.  She has been principal saxophonist and saxophone instructor for the Allegheny College Adult Band Camp and has served on the faculty of the Ithaca Academy of Music Band Camp for senior high students.