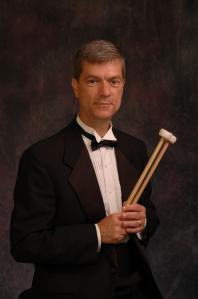 Steven Mathiesen has been the principal timpanist of the Binghamton Philharmonic since 1996 and performed in the percussion section from time to time prior to that date.

In January 2002, he was a featured soloist with the Philharmonic, performing Harmonic Rhythm, a timpani concerto composed by Russell Peck and jointly commissioned by the Binghamton Philharmonic and 38 other orchestras.

Mathiesen has appeared on recordings with the Bach Choir of Bethlehem, the Pennsylvania Sinfonia Orchestra and the Mainstreet Brass, as well as numerous studio recordings for Shawnee Press and Alfred Publishing.  He played timpani in Don’t Be a Carbon Sasquatch, a part of the recently released Disney DVD Schoolhouse Rock: Earth. His compositions and arrangements are published by Shawnee Press, Honeyrock Publications, C-Alan Publications and Permus Publications.

Steven received the Master of Music degree from the Cincinnati College-Conservatory of Music and a Bachelor of Music degree from the Ithaca College School of Music.  His principal teachers were William Youhass and Allen Otte. He teaches at Marywood University, Moravian College and Lehigh University. He is a graduate of the East Stroudsburg (Pa.) Area High School and was inducted into the school district’s Music Hall of Fame in 2005.  He and his family live in the Pocono Mountain region of Pennsylvania.